RUSSIA IN THE ECHR: CRIMEA WAS NOT ANNEXED, UKRAINE AND THE WEST FORGED THE EVIDENCES 12.09.2019

Representatives of Russia assured the European Court of Human Rights that Ukraine was controlled by “fascists” in February-March 2014. Russian soldiers simply “protected” the Crimean people from them, until Crimea “joined" Russia on 18 March 2014. They claim allegations of gross human rights violations to be "baseless", and Ukraine's claim against Russia to be "political" and based on the "propaganda imperative" of accusing Russia of events in Crimea and Eastern Ukraine.

The initial application in the case “Ukraine v. Russia (re Crimea)” (application no. 20958/14) was filed on 13 March 2014. As well as in other interstate applications filed by Ukraine against Russia, the latter primarily demanded recognition of the ECHR's lack of jurisdiction and closing the case. During the hearings, there appeared statements that the case was “political” and the ECHR would open a Pandora's box if it commences its consideration. The representation of reality by the Russian party and their QC contradicts the interpretation of events and the assessment of the human rights situation in Crimea provided by all democracies, the UN General Assembly and, in fact, all international authorities. The Grand Chamber of the ECHR has heard both parties and will now take the decision.

Ukraine alleges that the Russian Federation has violated a number of rights enshrined in the European Convention, including the right to life, the prohibition of torture, the right to a fair trial and freedom of expression and religion. Specific crimes include murder, kidnapping, politically motivated trials, and more. Ukraine alleges that Russia exercised effective control over Crimea since 27 February 2014 and "exercised jurisdiction over the situation, which led to numerous violations of the Convention". Much of the files were collected in collaboration with human rights NGOs, including the Crimean Human Rights Group and the Ukrainian Helsinki Human Rights Union.

On 27 February 2014, all democracies monitored the appearance of a large number of Russian soldiers without insignia in Simferopol, as well as the seizure of the Crimean parliament and other strategic facilities by these soldiers. These events were widely covered by the Western media. In some way, the fact that journalists arrived at the scene almost immediately and sent photos and videos to the newsrooms made Russia's denial of its involvement so absurd. In five years, the same Kremlin narrative about “coup” in Kyiv, crazy “fascists” and Russian soldiers simply “protected the Crimean people” from bloodshed, were in fact rephrased for the Strasbourg Court. The objective of this narrative is to “prove” that Russia gained “potential jurisdiction” only from the official date of annexation, namely 18 March 2014, and to deny all human rights violations after this date. 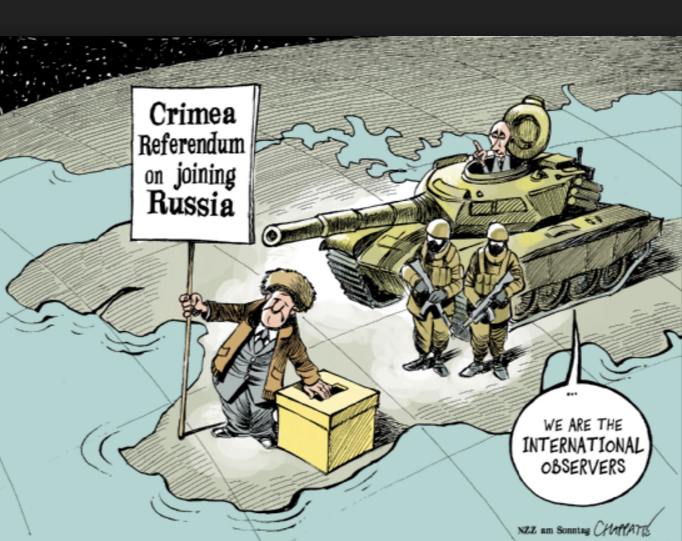 Russia used soldiers without insignia and so-called “self-defense” formations (paramilitary militias led by Russian citizens, such as former officer of Russia’s military intelligence service Igor Girkin) in order to further deny the effective control that Ukraine claims Russia had in Crimea since 27 February. Like Russia's government-controlled media, Russia's representatives in the ECHR avoided mentioning a “parliamentary session held at gunpoint”, the session that appointed Russian puppets as local leaders. They did not mention that so-called “referendum” did not offer any choice; that it was held under the supervision of armed men; that “observers” were from among the far-rights and other friends of Russia; that even the Council for Civil Society and Human Rights (under the President of the RF) recognized the “referendum” results as falsified. It is worth mentioning that the referendum, in any case, contradicted the Constitution of Ukraine. This means that even if the “referendum” was organized by some part of Crimean society, Russia could not legally use it as an excuse to annex Ukrainian territory. The event was boycotted by the Mejlis of the Crimean Tatar People. This indigenous people of Crimea exercised their right to self-determination, reaffirming their desire to remain within the territory of Ukraine.

If Galperin's appearance seemed entirely predictable, there were some extraordinary points in the address of Michael Swainston QC, who spoke for the Russian team.

He reiterated that Russia exercised no effective control over Crimea until 18 March 2014, and that it recognized "the Court's potential jurisdiction" only from that date. According to him, Ukraine's application was “unacceptable”. Swainston claimed that “Ukraine applied to a propaganda imperative to accuse Russia of what happened in Crimea and, of course, of what happened in Eastern Ukraine”, and that this is a political case, where the “alleged” human rights violations took a secondary position.

Swainston spent a lot of time and employed a lot of public speaking skills trying to reduce the weight of evidence acknowledged by all international authorities and NGOs. Referring to the latter, he used arguments that are very popular in Putin's Russia, that organizations which receive grants from abroad are referred to as “foreign agents” and are closely monitored by the state. Swainston avoided the term “foreign agent”, but tried to prove that the NGOs involved in the collection of evidence in this case received grants from the United States, the Netherlands and Britain. In his opinion, this calls into question their objectivity. This is an interesting position for a person who surely receives a significant financial reward from Russia.

Swainston claimed that “enormous resources have been employed by Ukraine to forge evidence against Russia" and spent some time promoting the idea that no evidence of human rights violations and victims’ testimonies had been presented.

All these arguments were rejected by Ivan Lishchyna, Deputy Minister of Justice of Ukraine and Ben Emmerson QC. Emmerson noted that Ukraine accused both Russian agents and their proxies of violating human rights. He emphasized that Russia, as the occupying state, should be responsible for this. Emmerson denied Swainston's assertion that the victims of the violations had nothing common. All these people – Ukrainian soldiers, journalists, Crimean Tatars, and ethnic Ukrainians – were against the occupation of Crimea. Emmerson's speech is worth hearing in full (here). He responds to Swainston's attempts to “muddy the water” with real facts: numerous reports confirming the real and major deterioration of human rights situation in Crimea and the persecution of those who oppose Russia's illegal occupation of the peninsula. He also provides a detailed description of a real military coup in February 2014 – coup d’état carried out by Russia in Ukrainian Crimea.

WAR WITH RUSSIA: REPORT FROM THE LEGAL FRONT

Ukraine is at war with Russia on several fronts, and the legal front is far from being secondary.
Read more

IVAN LISHCHYNA: "I HAVE ONE POLITICAL AMBITION – TO END THE CASES REGARDING DONBASS AND CRIMEA"

The reappointment of Ivan Lishchyna to the post of Deputy Minister of Justice, Agent before the European Court of Human Rights after the change of power in legal circles was called a positive signal. He has been representing Ukraine in the ECHR since June 2016.
Read more
This website uses cookies. By continuing to browse the site, you agree to the use of cookies.