PERMANENT COURT OF ARBITRATION IN THE HAGUE FOUND RUSSIA EXPROPRIATED NAFTOGAZ ASSETS IN CRIMEA IN VIOLATION OF INVESTMENT TREATY 01.03.2019

The Permanent Court of Arbitration in The Hague found in favor of NJSC “Naftogaz of Ukraine” and six of its subsidiaries, concluding that the Russian Federation was liable for the unlawful seizure of Naftogaz assets in Crimea under the bilateral investment treaty between Ukraine and Russia.

"This is a very important victory, which will enable us to put the aggressor to justice for the stolen assets. Thanks to efforts of international community and Ukraine, the cost of the Crimea annexation for Russia will constantly grow. The Tribunal’s award is an important step in this direction", said Andriy Kobolyev, Chairman of the Board of Naftogaz.

Naftogaz owned some of the most valuable energy assets in Crimea and was among the Russian Federation’s chief targets when, after unlawfully invading and occupying Crimea in 2014, Russia seized Ukrainian assets in Crimea.

The Arbitral Tribunal concluded that the Russian Federation’s actions against Naftogaz were unlawful and violated the Russia-Ukraine bilateral Agreement on Mutual Protection of Investments, which requires Russia to respect and protect Ukrainian assets, including those in Crimea.

Naftogaz commenced the arbitration against the Russian Federation in October 2016 under the Agreement on the Encouragement and Mutual Protection of Investments signed by the Cabinet of Ministers of Ukraine and the Government of the Russian Federation commonly known as Ukraine-Russia bilateral investment treaty. The Permanent Court of Arbitration in The Hague held a hearing on jurisdiction in May 2018. 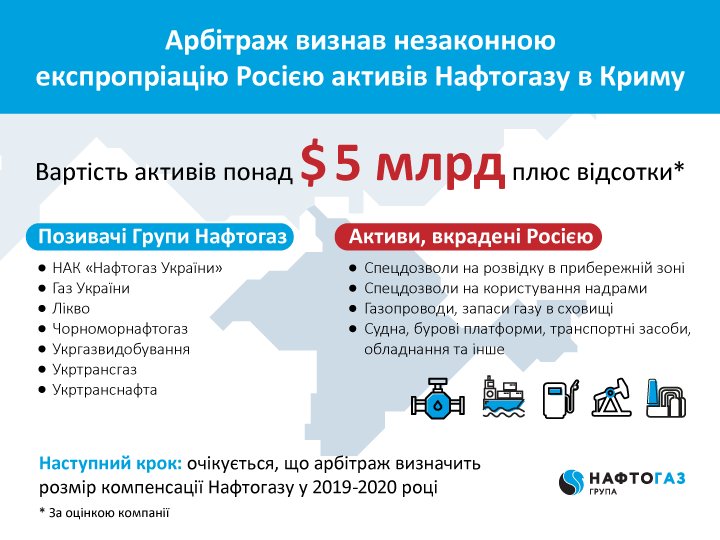 NJSC Naftogaz of Ukraine et al. versus The Russian Federation