ARBITRAL TRIBUNAL IN THE HAGUE PARTIALLY CONFIRMED ITS JURISDICTION IN CASE AGAINST RUSSIA – MFA 21.02.2020

The Arbitral Tribunal constituted under the United Nations Convention on the Law of the Sea (UNCLOS) in the case “Ukraine v. Russia” rejected Russia's position on its lack of jurisdiction in the case and found that it would examine important aspects of Ukraine's claims, including those related to UNCLOS violations by Russia in the Kerch Strait and the Sea of Azov – the Ministry of Foreign Affairs of Ukraine informed.

At the same time, the Tribunal concluded on its lack of jurisdiction over some of the claims concerning Ukraine's rights as a coastal state in waters near Crimea, as it had no jurisdiction to decide on sovereignty over the peninsula.

"The Tribunal rejected Russia's attempts to avoid liability for its conduct in the Sea of Azov and the Kerch Strait. Russia has tried to exclude these two vital international waterways from the scope of international maritime law. The Tribunal agreed with Ukraine that Russia's claim for inland water status was not a valid reason to challenge jurisdiction, and that this issue should be resolved at the stage of case consideration on the merits. The decision means that illegal building of the Kerch Bridge and illegal stop of vessels in the Sea of Azov by Russia, both of which harm international navigation, will face legal expertise", - the MFA stated. 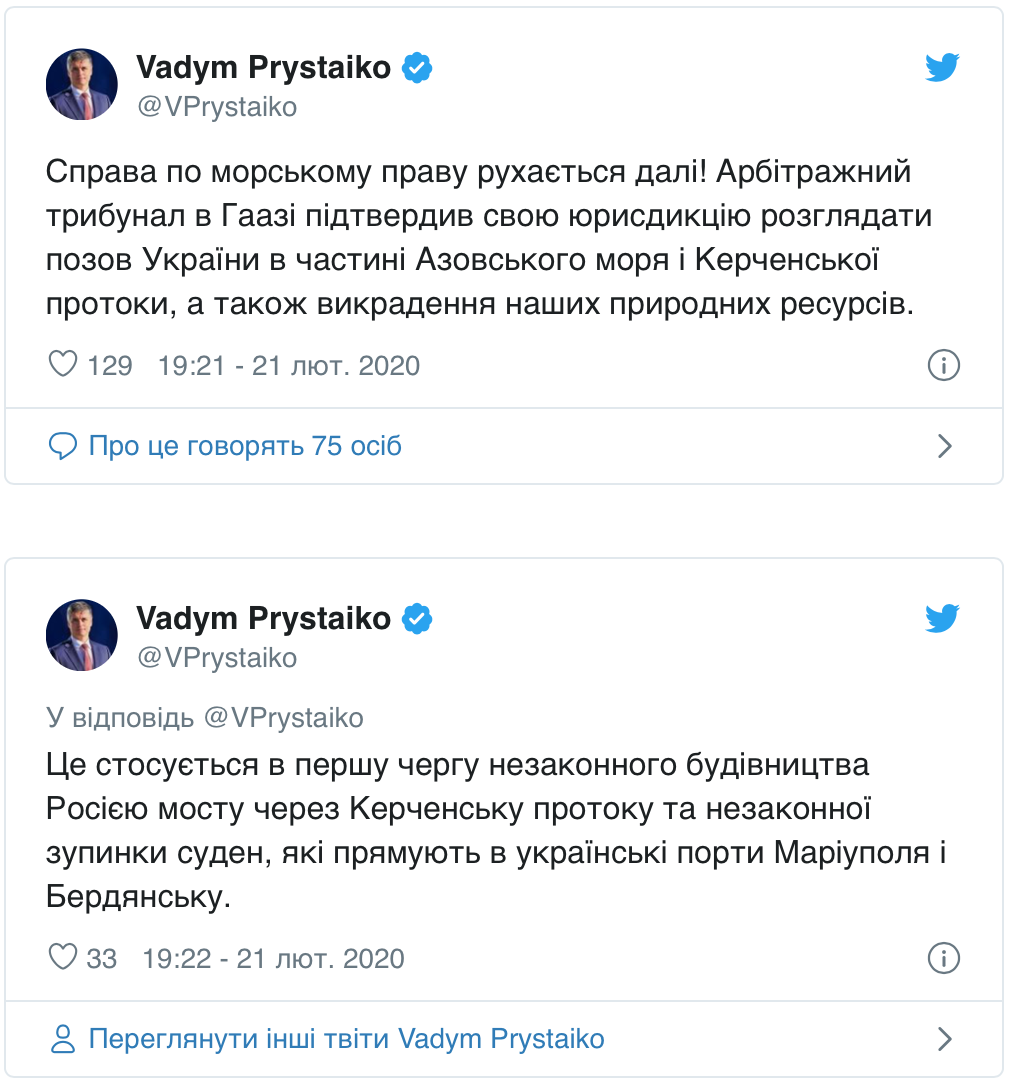 As for the rejected part of Ukraine's claims regarding waters around Crimea, the Ministry said, "the Tribunal has clearly stated that its recognition of the dispute over Crimea's territorial affiliation does not in any way entail recognition of any changes in such status". "Thus, the Tribunal's decision supports the international consensus on the non-recognition of illegal annexation of Crimea by the Russian Federation, and does not endorse Russia's assertions concerning sovereignty".

"Today's decision is a direct rejection of Russia's position that its unilateral actions are protected from legal appeals. Ukraine will prepare for the proper presentation of the case on the merits before the Arbitral Tribunal. After studying the written positions of the parties, the Tribunal will hold a hearing on the merits", - Kyiv said.

In accordance with the rules of procedure, the full text of the Decision of the Arbitral Tribunal will be made public after the parties express their possible objections to the presence of confidential information in the text of the Decision, but not later than 21 days after its delivery, the MFA said. 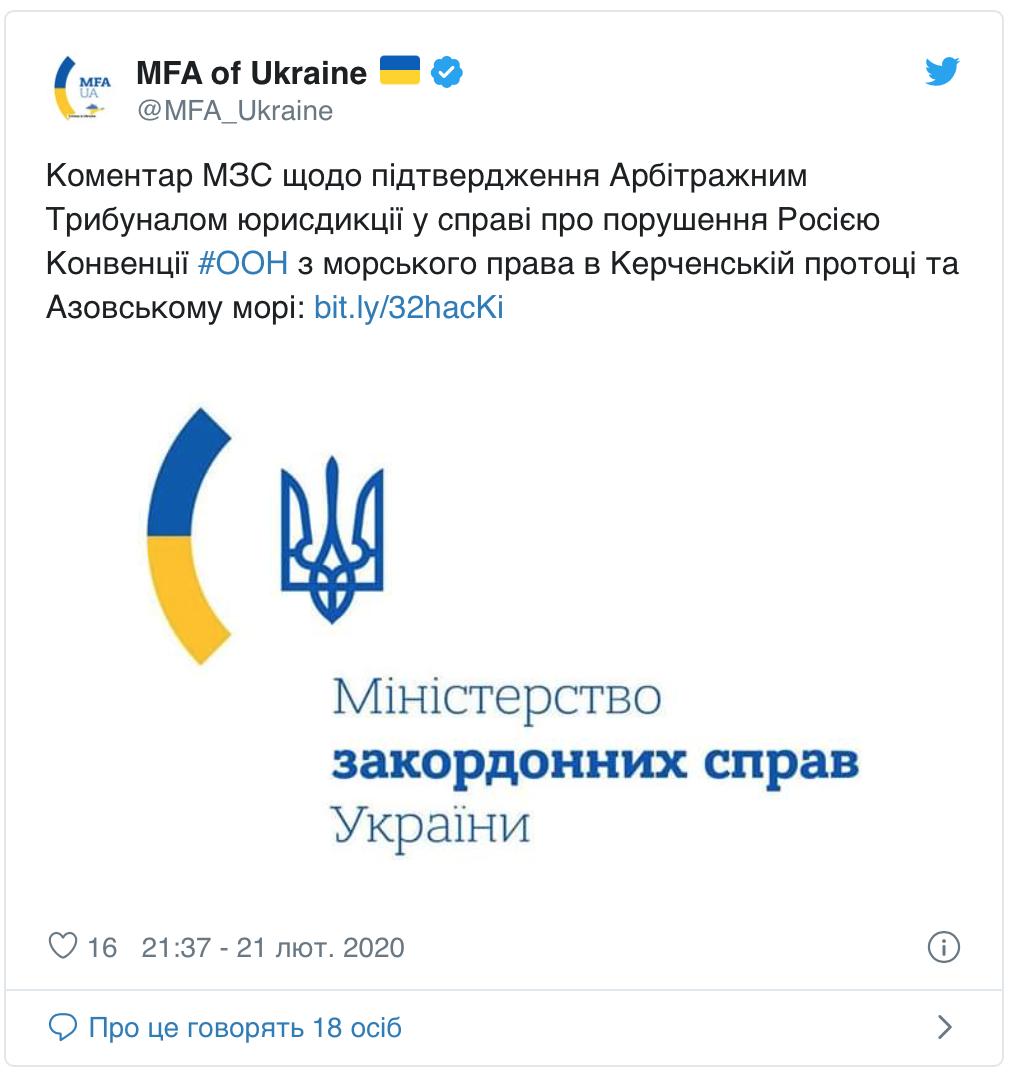 The Russian party has not commented this information yet.

The Arbitral Tribunal was constituted by the Permanent Court of Arbitration in The Hague, the Netherlands on the application of Ukraine against Russia filed in September 2016.

Ukraine has accused Russia of violating the UN Convention on the Law of the Sea in Ukrainian territorial waters in the Black Sea, Sea of Azov and Kerch Strait. Kyiv asked the Arbitral Tribunal to "protect Ukrainian rights at sea by ordering the Russian Federation to cease its illegal actions in the waters concerned", to confirm Ukraine's rights as a coastal state and to oblige Russia to "respect Ukraine's sovereign rights in its own waters, cease the theft of Ukraine’s resources", "stop international illegal acts in the relevant maritime waters" in accordance with the UN Convention on the Law of the Sea, as well as to "provide Ukraine with appropriate assurances and warranties of their non-recurrence and compensate Ukraine for all damages caused by Russia".

Russia, in turn, argued that the Tribunal had lacks jurisdiction over this case. In particular, with regard to the claims concerning waters near Crimea, Russia stated that the Tribunal had no jurisdiction over Ukraine's claim because it could not determine which state had sovereignty over the inland territory of Crimea. Representatives of Ukraine emphasized that Crimea was not the subject of dispute, because the peninsula remained an internationally recognized Ukrainian territory despite Russian annexation.

In addition to this arbitration proceeding, Ukraine initiated a number of other cases against Russia in international courts related to the occupation of Ukrainian Crimea by the RF and its hybrid aggression in Eastern Ukraine, as well as gas issues.

Some of these cases, including the current arbitration proceeding, were run by Olena Zerkal, former Deputy Minister of Foreign Affairs for European and Euro-Atlantic Integration. However, in late November 2019, she wrote a letter of resignation due to disagreement with the policy of the current Ukrainian Government: She explained that she considered unacceptable “request” for “friendship with Russia”. And the final argument for her resignation was her removal from participation in gas-related proceedings. She was dismissed in early December and ceased representing Ukraine in these trials.

The original article is available at the link
The Palace of Peace in The Hague, which houses a number of international courts, including the current Arbitral Tribunal on Ukraine's application against Russia. Photo by Peter Dejong (AP)