The European Court of Human Rights in Strasbourg held a hearing in the case “Ukraine v. Russia” regarding human rights violations in Crimea. The hearing was held in the framework of the case initiated by the application of Ukraine dated 13 March 2014, in which Ukraine claims that "since 27 February 2014, Russia have exercised control over the Autonomous Republic Crimea, which is an integral part of Ukraine".

Ukraine accuses Russia of violation of several articles of the European Convention on Human Rights, including the right to life, the right to liberty and security, the freedom of expression and movement, the right to a fair trial.

On the basis of this first and only public hearing, the Court has to consider the issue whether Russia exercised effective control over the territory of Crimea before “legal formalization” of annexation by the decision of the State Duma of Russia. The recognition of the fact of annexation in not an issue in this Court, because it is beyond its jurisdiction.

For three hours, the parties presented their positions. The parties had 45 minutes each for the presentation of their position in the case, and 20 minutes for answers to additional questions posed by judges of the Grand Chamber of the ECHR. The delivery of judgment was not expected today.

Ukraine was represented at the hearing by Ivan Lishchyna, Deputy Minister of Justice - Agent before the European Court of Human Rights, the team of four employees of the Ministry of Justice, and Ben Emmerson, a British lawyer, the former UN Special Rapporteur on Human Rights and Counter-Terrorism and the former British Judge of International Criminal Tribunals for the Former Yugoslavia and Rwanda.

Representatives of the Russian party were headed by Mikhail Galperin, Russian Agent before the ECHR and Deputy Minister of Justice. His team consisted of 14 lawyers, including Michael Swainston, British lawyer.

First, the floor was given to the head of Russian team Mikhail Galperin, who tried to convince the court that at the time of the annexation, Ukraine lacked a constitutionally legitimate government to which the local authorities in Crimea should have subordinated. According to him, Ukraine's leadership was not democratic. "Superior positions in the government, including position of the Minister of Defence, were held by fascists of “Svoboda” political party and “Right Sector"" - Mikhail Galperin said.

"This new government did not try to uphold democratic values and the rules of law. On the contrary, its appearance led to mass anti-Maidan movement. All the opponents faced violence from the new government and its nationalist supporters", - Galperin said. He used the protests in all cities, which Russia referred to as the territory of ‘Novorossiya’, without naming it directly, as an example.

"Since 2014, people all over Ukraine have restrictions on the right to speak their native language, practice their religion and meet relatives on the other side of the border and freely express their views", - Galperin said.

Also, as claimed by the Russian representative, Ukraine could not provide any evidence of its allegations that there were Russian troops in Crimea, which controlled the situation on the peninsula.

They may have been there, but their presence was stipulated by the Agreement on the Black Sea Fleet of 1997, "even Ukrainians specify the number of 22 thousand servicemen", which is less than 25 thousand, established by the Agreement. And Russia officially asserts the presence of 12 thousand of its servicemen on the peninsula. Besides that, "they did not do anything there," - Galperin claimed.

"They prevented nationalist’s invasion from the mainland Ukraine to Crimea. But prevention does not mean control". The fact that Russian troops were presented there is insufficient to claim that they exercised “effective control” or had “jurisdiction over someone”. The will to “reunite with Russia” was freely expressed by the residents of the peninsula, and therefore, Ukraine remained responsible for all events in Crimea until 18 March 2014, when Crimea “reunited with Russia”, the head of a Russian group of lawyers said.

Michael Swainston, British lawyer, who represented the interests of Russia, alleged that Ukraine was only trying to promote its propaganda and that the case was political and out of the Court’s jurisdiction.

"Ukraine reiterates its political propaganda regarding the events, which do not fall under the jurisdiction of the court", – Swainston said.

British lawyer spoke about the "nihilhood of Ukrainian evidence", which, in his opinion, were "taken from the third hand" and described "individual cases and not systemic violations" and were an attempt to shift the blame on Russia on the basis of propaganda motivation.

In support of his assertion, he cited the example of evidence, provided by Ukraine in another case – regarding the war in Donbass. There, according to Swainston, "one could see fake pictures of Russian armored personnel carriers". That example was not related to the case, but, according to the British lawyer, "demonstrated the Ukrainian approach".

The "fakes" or, more correctly, non-governmental organizations, which collected evidence, according Swainston, were funded by George Soros’ “Open Society Foundations”, American, British and even the Dutch governments. The continuation of the court proceeding requires real first hand evidences of United Nations High Commissioner for Human Rights, and not the evidence taken from statements of these unreliable NGOs,- Michael Swainston finished his speech. 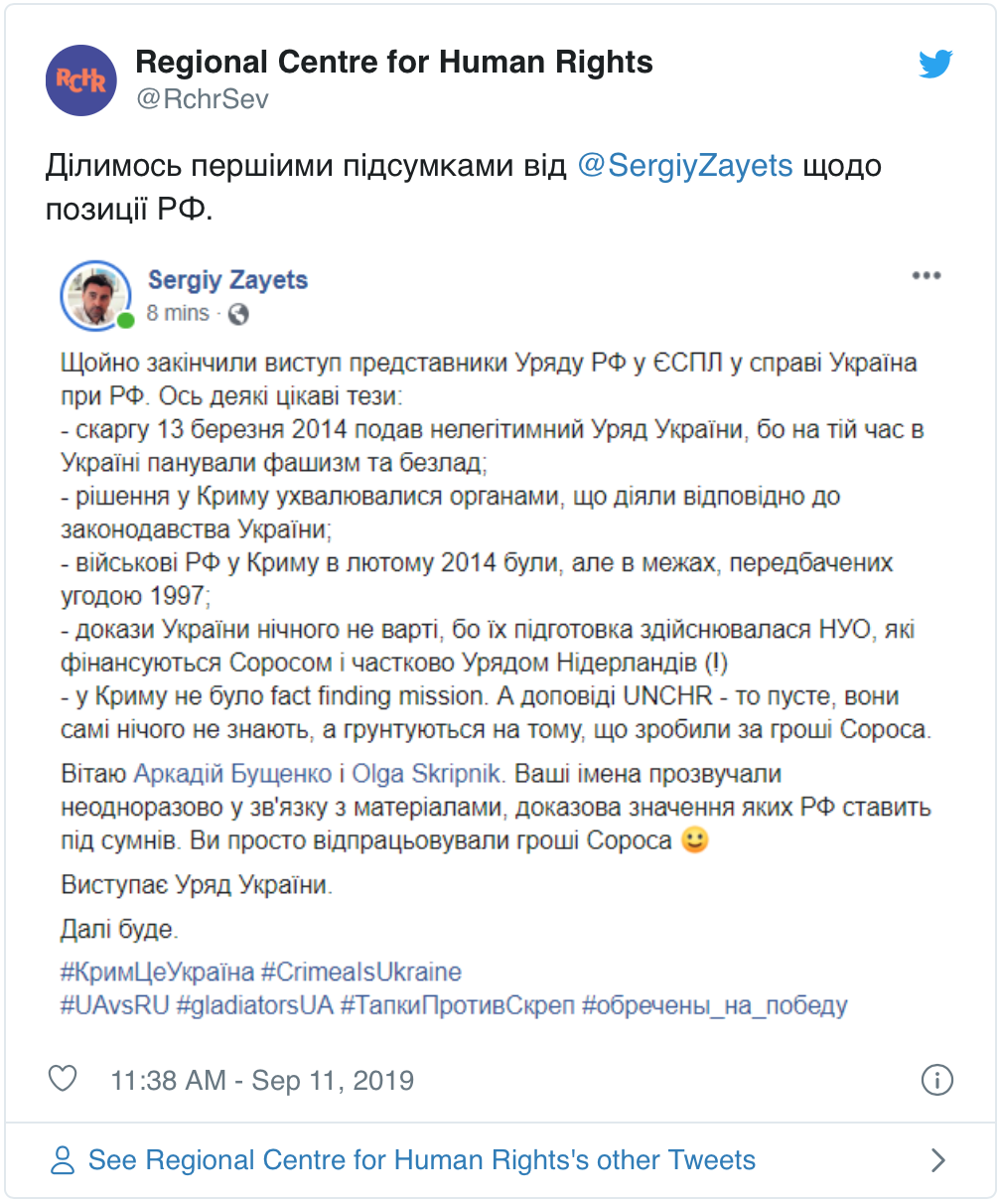 "MILITARY COUP D'ETAT WAS NOT IN KYIV, BUT IN CRIMEA, AND THE OCCUPATION BEGUN FROM IT" – UKRAINIAN PARTY

Responding to the speech of Russian lawyers, Ivan Lishchyna said that he personally had headed a team of lawyers, who had prepared the case and collected evidences. Therefore, he is familiar with every given fact of violations of the rights of Ukrainian citizens on the territory of Ukraine, committed by representatives of the opposing state, which violated the territorial integrity of Ukraine in Crimea. According to him, some cases of persecution of Ukrainian citizens in Crimea formed a picture of the "politically motivated repression, directed against certain vulnerable groups" – Ukrainians and Crimean Tatars, Ukrainian servicemen and pro-Ukrainian activists, non-ROC clergy and independent journalists.

According to Lishchyna, knowing that the Strasbourg Court is not entitled to consider direct issues of the occupation and annexation of Crimea, Ukrainian party hopes only to establish the fact of losing its “effective control” over the peninsula and determine the date of the event – as Ukraine insists, it happened on 27 February 2014.

The very essence of the Ukrainian case was represented by the British lawyer Ben Emmerson. He also spoke about the “military coup d’état” that took place in February 2014 but in Crimea, not in Kyiv. And immediately after that, the occupation of Crimea took place. The Russian Government began to persecute everyone opposing occupation, regardless of the fact whether they were “real opponents, or only perceived to be so”. That was something that united all the victims of the Russian occupation regime, said Emmerson. As of February 2018, over 4 thousand of individual application regarding the actions of Russia in Crimea were filed.

At the same time, Emmerson referred to the reports of the United Nations High Commissioner for Human Rights of 2017 and 2018. They clearly indicate the systematic violations of human rights in Crimea. Russia violates the right to life, the right to liberty and security, including by allowing violent disappearance of people, holding of arbitrary searches, detentions, "all targeted at political opponents of the Russian occupation".

In contrast to the allegations of the Russian party, all the facts were not only carefully collected, but also verified by the Office of the High Commissioner on compliance with the general methodology and documented in monthly reports. Thus, Emmerson claimed that the reports of the High Commissioner were "pure charges and recognition of guilt of the Russian policy of persecution, targeted against certain minorities". Even more, the situation with observance of human rights in Crimea, in accordance with those reports, was deteriorating. However, the Russian party did not investigate any of violations, because such a matter required urgent consideration by this Court, Emmerson said.

According to Emmerson, the Russian military forces have exercised effective control over Crimea since 27 February 2014, when they took it over by sea, by land and by air. Russian servicemen seized Government’s facilities in Crimea, dissolved the Government of Crimea, seized the Parliament of Crimea and hoisted Russian flag over it. The so-called “referendum”, not recognized by any international institution, also did not help to “legalize” the occupation. Thus, the European Court of Human Rights also should not even indirectly recognize it, insists Emmerson. 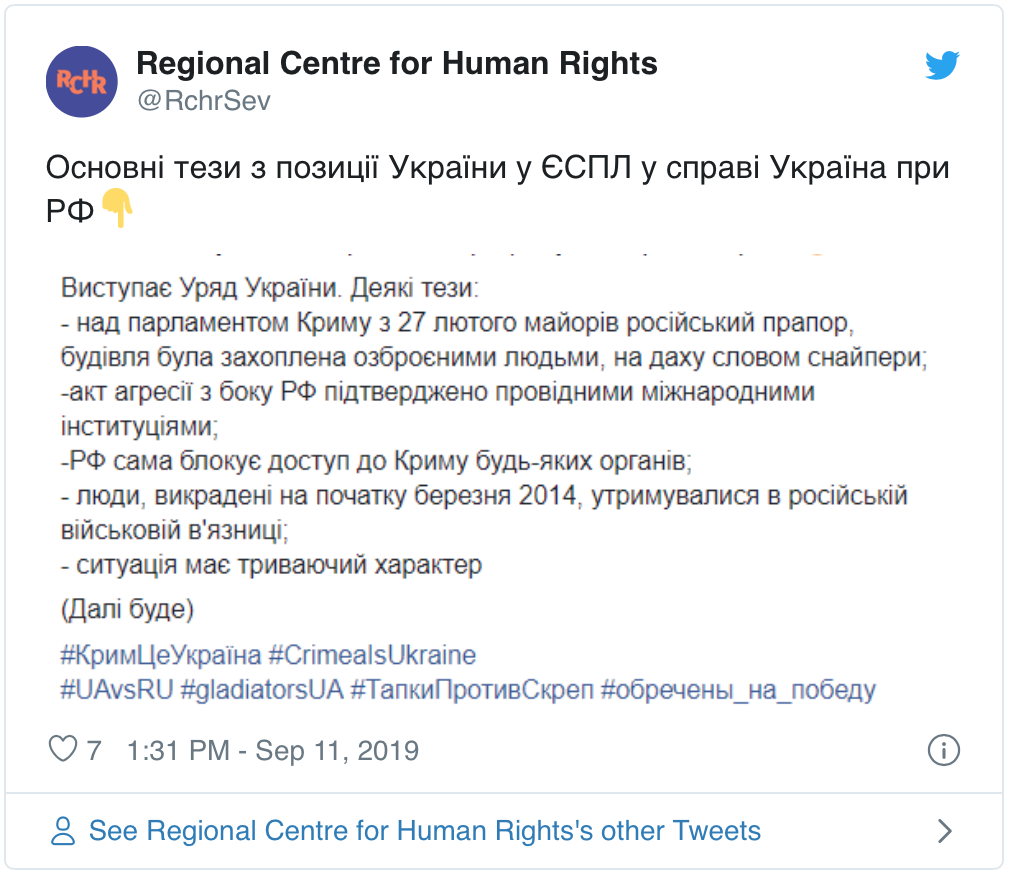 At the end of the three-hour hearing, the Presiding Judge announced that the decision would be delivered later. According to Ukrainian observers, this will happen not earlier than the middle of next year.

Little attention was paid to this case by the Russian media, as the very words “annexation” and “occupation” are unacceptable in the Russian public space. Some Russian independent lawyers came to the hearing. This is how Pavel Chikov, the Head of the Agora International Human Rights Group, summed up on the events in the courtroom.

Official Russian media reiterated the Gvernment's position. And independent media, such as Meduza or Nezavisimaia Gazeta, did not report on the hearing of the case regarding Crimea in the European Court of Human Rights at all.

Commenting on the hearing in Strasbourg for "RIA Novosti" news agency, Mikhail Galperin, Deputy Minister of Justice, said that the Ukrainians were trying to use the Court, which deals with human rights, to solve their political problems. In his opinion, the ECHR may deliver decision in a several months. Only then, it will be clear whether this Court will hear the case on the merits.

Yurii Berestnev, an expert of the Bulletin of the European Court of Human Rights (Russian scientific and analytical journal), was asked by "RIA Novosti" agency to comment on the hearing. He reiterated the position of Moscow and said that the Ukrainian party "is not as much concerned about individual applicants as about obtaining from the Strasbourg Court acknowledgment of its positions on “occupation’".

Among Ukrainian media, the events of the trial were actively covered by "Yevropeiska Pravda" and "the Babel", which reported on the preparations and events concerning the court hearing with the help of Dead Lawyers Society legal media, correspondents of which were writing down positions of the parties and live texting from the courtroom.

The original article is available at the link
The first and only public hearing on the case “Ukraine v. Russia” regarding human rights violations in Crimea was held in Strasbourg on 11 September 2019. Photo by Vincent Kessler (Reuters)